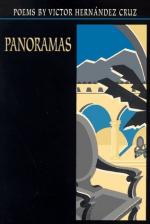 Get Interview by Victor Hernández Cruz with Bill Moyers from Amazon.com
View the Study Pack

In the following interview, Moyers discusses Cruz's use of language and the influence of Puerto Rican culture on his poetry.

Victor Hernández Cruz infuses his poetry with the rhythms, colors, and textures of Puerto Rico, his homeland, and the Lower East Side of New York City, where he grew up. He has reached out to the several communities that have shaped his work and involved their residents in artistic projects. He is a founding member of the Before Columbus Foundation, which seeks to make Americans aware of literature often overlooked by the establishment. Cruz has taught most recently at the University of California in San Diego.

[Moyers:] No one has been able to pigeonhole you. Your poetry...

Interview by Victor Hernández Cruz with Bill Moyers from Gale. ©2005-2006 Thomson Gale, a part of the Thomson Corporation. All rights reserved.