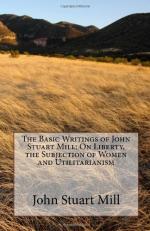 Get Critical Essay by Mark Strasser from Amazon.com
View the Study Pack

In the following essay, Strasser evaluates Mill's moral stance and characterizes Mill primarily as an “act-utilitarian.”

To make matters more complicated, Mill writes ambiguously when he says that actions are morally right insofar as they promote happiness. He might mean that an agent acts...

Critical Essay by Mark Strasser from Gale. ©2005-2006 Thomson Gale, a part of the Thomson Corporation. All rights reserved.