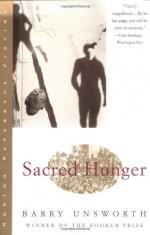 Get Interview by Barry Unsworth with Phil Hogan from Amazon.com
View the Study Pack
View the Lesson Plans

In the following interview, Unsworth reflects on his childhood and literary influences as well as on winning the prestigious Booker Prize for Sacred Hunger.

On balance, Barry Unsworth is in favour of literary prizes, even if he has to share one.

'I'm glad enough to have trousered the money,' he says, smiling diffidently—as much at his turn of phrase as at the sudden novelty of being £10,000 better off. 'And if the judges were genuinely at loggerheads between myself and Ondaatje, it was better to divide the prize than settling on a third who might not have been the first choice of anyone.'

In a posh suite on the tenth floor of the Royal Garden Hotel in Kensington, Unsworth pours a second cup of morning coffee after the night's celebrations. Cheerful and attentive...

Interview by Barry Unsworth with Phil Hogan from Gale. ©2005-2006 Thomson Gale, a part of the Thomson Corporation. All rights reserved.