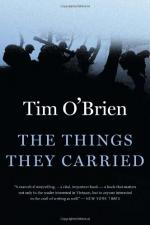 Tim O'Brien
This literature criticism consists of approximately 62 pages of analysis & critique of The Things They Carried.

In the following essay, Heberle provides a thematic and stylistic analysis of The Things They Carried and locates the book within O'Brien's oeuvre.

After publishing his fable of nuclear age trauma in 1985, O'Brien's next novel was to have been The People We Marry, a work that eventually appeared as In the Lake of the Woods in 1994 (Kaplan 1995: 218). In the interim, however, he published several short stories, some set in Viet Nam and others in the United States but all related to the war. The shorter stories took on a life of their own and eventually a comprehensive form that became The Things They Carried, published by Houghton Mifflin in 1990, four years before the novel that was to have...

Critical Essay by Mark A. Heberle from Gale. ©2005-2006 Thomson Gale, a part of the Thomson Corporation. All rights reserved.