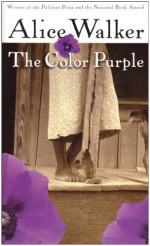 Get Critical Essay by James C. Hall from Amazon.com
View the Study Pack
View the Lesson Plans
Related Topics
Now Is the Time to Open Your Heart

Alice Walker
This literature criticism consists of approximately 20 pages of analysis & critique of The Color Purple.

In the following essay, Hall examines Walker's portrayal of female repression in society and religion in The Color Purple, commenting that Celie's emotional growth depends largely on her gradual rejection of the caucasian, male God figurehead.

[Some] receive the news of the death of God and the questionableness of authority with great enthusiasm. Like servants released from bondage to a harsh master or children unbound from the rule of a domineering father, such individuals feel free to become themselves.

The Color Purple, Alice Walker's novel of black feminist awakening, is also a model for the reconstruction of a black feminist literary tradition. If the existence of such a tradition had previously been marked by the “white page” and historical silence, Walker subverts...

Critical Essay by James C. Hall from Gale. ©2005-2006 Thomson Gale, a part of the Thomson Corporation. All rights reserved.