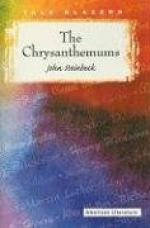 Get Critical Essay by Christopher S. Busch from Amazon.com
View the Study Pack

John Steinbeck
This literature criticism consists of approximately 14 pages of analysis & critique of The Chrysanthemums.

SOURCE: “Longing for the Lost Frontier: Steinbeck's Vision of Cultural Decline in ‘The White Quail’ and ‘The Chrysanthemums’,” in Steinbeck Quarterly, Vol. XXVI, Nos. 3–4, Summer-Fall, 1993, pp. 81–90.

In the following essay, Busch illuminates Steinbeck's preoccupation with an idealized frontier past in both “The Chrysanthemums” and “The White Quail.”

In the course of his forty-year career, John Steinbeck consistently integrated elements of American frontier history, mythology, and symbolism into his fiction and nonfiction. Steinbeck's fascination with the frontier past germinated during his boyhood in Salinas, at that time a cowtown described by Jackson J. Benson as “a throwback to the frontier towns of a half-century before.”1 This vital interest in the frontier West remained with him throughout his life, impelling him in America and Americans to validate traditional mythic conceptions of the nation's Western heritage. He writes:

The dreams of a people either create folk literature or find their way...

Critical Essay by Christopher S. Busch from Gale. ©2005-2006 Thomson Gale, a part of the Thomson Corporation. All rights reserved.