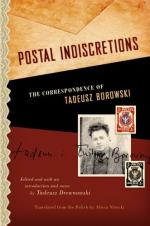 Get Critical Essay by Andrzej Wirth from Amazon.com
View the Study Pack

This literature criticism consists of approximately 17 pages of analysis & critique of Tadeusz Borowski.

In the following essay, Wirth argues that Borowski's short stories of the Holocaust represent the invention of a new conception of tragedy in literature that is suitable for expressing the horrors of twentieth-century crimes against humanity.

Borowski was the son of a laborer and a seamstress. He was born in 1922 in Żytomierz in Soviet Ukraine. He and his family came to Poland in 1933. The family was poor, so he and his brother had to be sent to an institution. Then, while attending a secondary school in Warsaw, he had to support himself by giving lessons. He completed his schooling in May 1940 under the occupation when attendance at classes was already illegal. He...

More summaries and resources for teaching or studying Tadeusz Borowski.

Critical Essay by Andrzej Wirth from Gale. ©2005-2006 Thomson Gale, a part of the Thomson Corporation. All rights reserved.