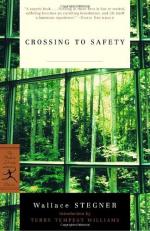 Get Critical Review by Clark Kimball from Amazon.com
View the Study Pack

This literature criticism consists of approximately 3 pages of analysis & critique of Wallace Stegner.

The very act of writing, of the creation of words and of sentences, is an exercise in mnemonics—the art of memory and of remembrance. So too, is the act of reading an exercise in creative memory, especially when the words and sentences are those of the master writer, Wallace Stegner, and are from his most recent book, Collected Stories of Wallace Stegner.

In his foreword, Stegner says that his memory is as much an inventor as it is a recorder. This is central to the reading of his work. Stegner's inventions and recordings here include 31 fiction stories. Many were first published in American magazines at mid-century...

Critical Review by Clark Kimball from Gale. ©2005-2006 Thomson Gale, a part of the Thomson Corporation. All rights reserved.