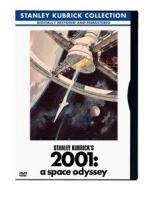 Get Critical Essay by Philip Strick from Amazon.com
View the Study Pack

Stanley Kubrick
This literature criticism consists of approximately 5 pages of analysis & critique of 2001: A Space Odyssey.

In the following essay, Strick traces the origins and development of Kubrick's 2001.

In March 1964, Arthur C. Clarke was contacted at his home in Sri Lanka by Stanley Kubrick, who wanted to make “the proverbial good science fiction movie” and was looking for stories. Kubrick already had his own idea of what such a project would have to contain: “(1) The reasons for believing in the existence of intelligent extra-terrestrial life. (2) The impact (perhaps even the lack of impact in some quarters) such a discovery would have on Earth in the near future”.

Clarke suggested “The Sentinel”, a short piece he had written in 1948 about the finding of an alien signalling device on the Moon. The story met the first of Kubrick's requirements, but not the second. Although Clarke had tackled the possible reactions to alien encounter...

Critical Essay by Philip Strick from Gale. ©2005-2006 Thomson Gale, a part of the Thomson Corporation. All rights reserved.