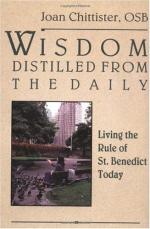 Get Critical Essay by Ildephonse Cardinal Schuster from Amazon.com
View the Study Pack

This literature criticism consists of approximately 12 pages of analysis & critique of Benedict of Nursia.

In the following essay, Schuster details the influential liturgy St. Benedict outlined in his Rule—later known as the Cursus S. Benedicti.

As in the rest of the Rule, so also with regard to...

More summaries and resources for teaching or studying Benedict of Nursia.

Critical Essay by Ildephonse Cardinal Schuster from Gale. ©2005-2006 Thomson Gale, a part of the Thomson Corporation. All rights reserved.