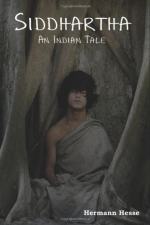 Get Critical Essay by Ernst Rose from Amazon.com
View the Study Pack

In the following essay, Rose comments on the artistic logic that prompted Hesse to use the influences of his own life experience in writing Siddhartha.

Demian as well as Klingsor's Last Summer already had visualized an ironical acceptance of the world as a possible solution for the problem of human existence. Yet because of their contemporary connotations both stories were open to misunderstanding. It was not conformity that Hesse was advocating, but a reshaping of the world from within. The Turn Inward (Der Weg nach Innen) was the common title chosen by him, in 1931, when he brought Siddhartha and Klingsor's Last Summer together under the same cover. The “turn inward” was meant to be described in both Demian and Klingsor.

Critical Essay by Ernst Rose from Gale. ©2005-2006 Thomson Gale, a part of the Thomson Corporation. All rights reserved.