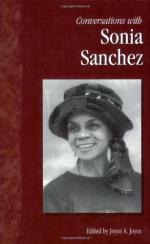 Get Critical Review by Kamili Anderson from Amazon.com
View the Study Pack

This literature criticism consists of approximately 3 pages of analysis & critique of Sonia Sanchez.

In the following review, Anderson asserts that "the poems in [Sanchez's Under a Soprano Sky are tempered and configured to scorching extremes, they are, simultaneously, her most introspective and intricate."]

The name Sonia Sanchez may be the most undeservedly underspoken of contemporary women poets in America. Relative to her merits as both prolific poet (she has authored thirteen books) and social activist, widespread critical acknowledgment of Sanchez's talents has been remiss. No doubt this is a result of the boldly rhetorical nature of her work and her involvement with so-called "radical" Black literary and cultural factions. But her poetry, for its precision and insightfulness, warrants far broader recognition, no matter how belated.

Sanchez was a leading spokessister for the women's side of things in the defiant Black Arts literary upsweep of the 1960s and 1970s. It...

Critical Review by Kamili Anderson from Gale. ©2005-2006 Thomson Gale, a part of the Thomson Corporation. All rights reserved.