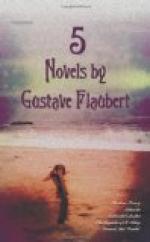 Get Critical Essay by Carol A. Mossman from Amazon.com
View the Study Pack

In the following essay, Mossman assesses Salammbô as an iconoclastic juxtaposition of myth and history illuminated by a symbolic conjunction of the sacred and the feminine.

Beyond the literary violence which is Salammbô—with its gruesome details of desert war waged between the Mercenaries and the Carthaginians and the cannibalism to which the Mercenaries are ultimately reduced, with the periodic, painfully clinical descriptions of Hanno's advancing leprosy—lies a tale of profanation. Flaubert's novel in fact begins by defiling the sacred as the drunken Barbarians, for sport, slaughter Salammbô's holy fish, direct descendants of Carthage's piscine ur-mothers which “avaient fait éclore l'oeuf mystique où se cachait la Déesse” (35). This preliminary assault poses an important paradigm, constituting as it does an act of violence directed against maternal origins.

Critical Essay by Carol A. Mossman from Gale. ©2005-2006 Thomson Gale, a part of the Thomson Corporation. All rights reserved.