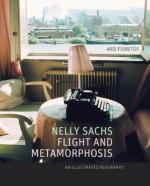 Get Critical Review by Times Literary Supplement from Amazon.com
View the Study Pack

This literature criticism consists of approximately 4 pages of analysis & critique of Nelly Sachs.

In the following review, the critic praises Selected Poems in spite of some "signs of hurry" evident in the translation of the poems from German to English.

Nelly Sachs was almost unknown to English-speaking readers until she won the 1966 Nobel Prize for Literature. Younger Germans had discovered her poems only a few years before …, and even then such transcendental treatment of suffering and violence, specifically genocide, must have seemed, to many, a lofty irrelevance. With the award of the Nobel Prize, Nelly Sachs has been rushed into English: Christopher Holme's version of her play Eli was sent for, Michael Hamburger was commissioned to translate poems, Ruth and Matthew Mead contributed their share, as did Michael Roloff (who had made the capture).

The translations do show some signs of hurry. These are highly volatile and...

Critical Review by Times Literary Supplement from Gale. ©2005-2006 Thomson Gale, a part of the Thomson Corporation. All rights reserved.