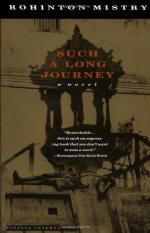 Get Critical Essay by Deepika Bahri from Amazon.com
View the Study Pack
View the Lesson Plans

Such a Long Journey | Criticism

Rohinton Mistry
This literature criticism consists of approximately 49 pages of analysis & critique of Such a Long Journey.

In the following essay, Bahri examines Such a Long Journey and contends the strength of Mistry's writing comes from mixing native Indian dialects with the English of his primary reading audience.

No Realist contents himself with repeating forever what is already well known; that would not demonstrate a living relation with reality.

In an otherwise complimentary review of Rohinton Mistry's Such a Long Journey (1991), Glenn Carey is chagrined to note a “serious flaw,” to wit, the lack of an “appendix of Hindi expressions used in the story, with English translations” (127). David Ray's review of the novel in the New York Times Book Review also draws attention to Mistry's use of various...

Critical Essay by Deepika Bahri from Gale. ©2005-2006 Thomson Gale, a part of the Thomson Corporation. All rights reserved.