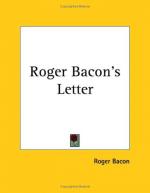 Get Critical Essay by Etienne Gilson from Amazon.com
View the Study Pack

This literature criticism consists of approximately 29 pages of analysis & critique of Roger Bacon.

Gilson was a prominent and prolific Neo-Thomist philosopher. He was the founder and longtime director of the Institute of Mediaeval Studies in association with St. Michael's College, the University of Toronto. In the following excerpt, Gilson offers a detailed overview of Bacon's beliefs as a philosopher and as a reformer.

A mere glance at the philosophical works of Roger Bacon is enough to convince the reader that they were written under the predominant influence of Avicenna. The style is Avicennian; the titles are Avicennian (Communia naturalium); last, not the least, Bacon himself explicitly says that, to him, Avicenna was the leader and the prince of philosophy after Aristotle (Avicenna dux et princeps philosophiae post eum, Opus majus). Naturally, Bacon never doubted that, in following Avicenna, he was following Aristotle...

Critical Essay by Etienne Gilson from Gale. ©2005-2006 Thomson Gale, a part of the Thomson Corporation. All rights reserved.