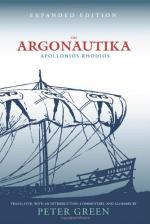 Apollonius of Rhodes
This literature criticism consists of approximately 5 pages of analysis & critique of The Argonautika: The Story of Jason and the Quest for the Golden Fleece.

In the following excerpt, Hunter discusses what little information can be gleaned from existing fragments concerning Apollonius's writings other than the Argonautica.

Works Other Than Argonautica39

… About A.'s [Apollonius's] considerable output in both poetry and prose we are very poorly informed, but even scraps of information can help to place Arg. in its literary and intellectual context.

One late source40 refers to A.'s epigrams, but none survive, if the problematic distich about Callimachus is excluded. The citation is for a story of metamorphosis of a kind familiar both in Arg.41 and A.'s 'foundation poems'. The popularity of the epigram form with Alexandrian poets requires no illustration.42

Three choliambic43 verses survive from a poem called Kanobos (frr. 1-2 Powell), which must have been concerned with the...

Critical Essay by R. L. Hunter from Gale. ©2005-2006 Thomson Gale, a part of the Thomson Corporation. All rights reserved.