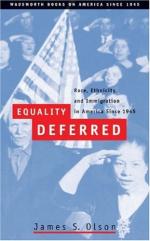 Get Critical Essay by Carl Wittke from Amazon.com
View the Study Pack

This literature criticism consists of approximately 32 pages of analysis & critique of Immigration.

In the following essay, Wittke classifies the representation of immigrants in American theatre in the last half of the nineteenth century, including Irish, German, Italian, and Jewish Americans.

The contact of successive immigrant waves with a New World environment is one of the central themes of American history, for the United States represents the experience of many peoples from many lands, speaking many tongues, in a republic with political unity and cultural diversity, and where there are other tests for a patriot than a man's accent, birthplace, or the color of his skin.

One of the still largely unexplored phases of the history of American immigration is the characterization of the immigrant for purposes of comic relief and dramatic entertainment on the American stage, and the emergence of certain immigrant...

Critical Essay by Carl Wittke from Gale. ©2005-2006 Thomson Gale, a part of the Thomson Corporation. All rights reserved.