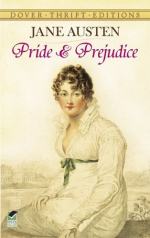 Jane Austen
This literature criticism consists of approximately 33 pages of analysis & critique of Pride and Prejudice.

SOURCE: Carr, Jean Ferguson. “The Polemics of Incomprehension: Mother and Daughter in Pride and Prejudice.” In Tradition and the Talents of Women, edited by Florence Howe, pp. 68-86. Urbana: University of Illinois Press, 1991.

In the following essay, Carr analyzes the role of the mother in Pride and Prejudice, focusing on Mrs. Bennet's exclusion from the social world.

She was a woman of mean understanding, little information, and uncertain temper.

Stupidity (incomprehension) in the novel is always polemical: it interacts dialogically with an intelligence (a lofty pseudo intelligence) with which it polemicizes and whose mask it tears away … at its heart always lies a polemical failure to understand someone else's discourse, someone else's pathos-charged lie that has appropriated the world and aspires to conceptualize it, a polemical failure to understand generally accepted, canonized, inveterately false languages with their lofty labels for things and events...

Critical Essay by Jean Ferguson Carr from Gale. ©2005-2006 Thomson Gale, a part of the Thomson Corporation. All rights reserved.