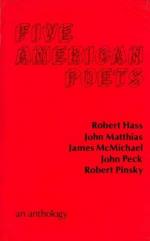 Get Interview by Robert Pinsky with Harry Thomas, et al. from Amazon.com
View the Study Pack

This literature criticism consists of approximately 27 pages of analysis & critique of Robert Pinsky.

In the following interview, which was conducted originally on February 2, 1993 in Thomas's classroom at Davidson College, Pinsky discusses the art of translation, the cultural ways Judaism affected him personally, the influence of Eastern philosophies in his poems, and the transformative, historical aspects of his poetics.

[Jim Knowles:] There's an essay by Seamus Heaney called "The Impact of Translation" in which he starts out with a translation by you. He talks about the problem a poet writing in English might have when he realizes that the kind of poem he is struggling to write has been written already in some other part of the world.

[Robert Pinsky:] The poem is "Incantation," by Czeslaw Milosz, with whom I worked on various translations. Not long after Czeslaw and I had done the translation, Seamus was over to the house...

More summaries and resources for teaching or studying Robert Pinsky.

Interview by Robert Pinsky with Harry Thomas, et al. from Gale. ©2005-2006 Thomson Gale, a part of the Thomson Corporation. All rights reserved.