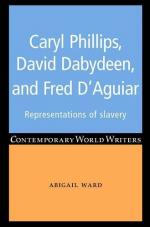 Get Critical Review by Oliver Reynolds from Amazon.com
View the Study Pack

In the following review, Reynolds likens the structure of Crossing the River to "a consciousness of the burdens of slavery."

Crossing the River, Caryl Phillips's fifth novel, returns to the structure of his third, Higher Ground (1989), by juxtaposing stories from the past and near-present. It is divided into four main parts and two of its four stories overlap. In the first part, Edward Williams, an American tobacco planter and a solid Christian, sets off for West Africa in 1841 in search of a former slave of his, Nash, who is now a missionary.

A substantial pleasure of Cambridge, Phillips's last book, was the way it enjoyed making obeisance to the orotundities of nineteenth-century prose. Whereas Cambridge encouraged the luxury of slow reading, the prose here is plain to the point of worthiness, and when Nash's story is told...

Critical Review by Oliver Reynolds from Gale. ©2005-2006 Thomson Gale, a part of the Thomson Corporation. All rights reserved.