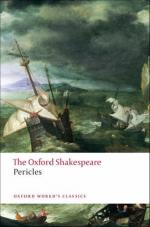 SOURCE: Mullaney, Steven. “‘All That Monarchs Do’: The Obscured Stages of Authority in Pericles.” In The Place of the Stage: License, Play, and Power in Renaissance England, pp. 135-51. Chicago: University of Chicago Press, 1988.

In the following essay, Mullaney argues that Pericles represents a dramatic experiment in which Shakespeare attempted to dissociate the dramatic art form from its popular context and instead re-imagines it as a “purely aesthetic phenomenon, free from history and from historical determination.”

In 1605, the Queen's Revels Children performed Eastward Ho! at Blackfriars. The authors, Jonson, Chapman, and Marston, were soon apprehended and imprisoned, and for a time it was rumored that Jonson would suffer the loss of his nose and ears for satire directed against the king and his Scottish knights. A year later John Day's The Isle of Gulls resulted in similar charges, and again “sundry were committed to Bridewell.”1 When again...

Critical Essay by Steven Mullaney from Gale. ©2005-2006 Thomson Gale, a part of the Thomson Corporation. All rights reserved.