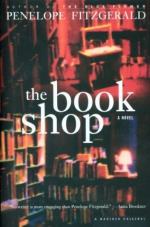 Get Critical Review by Richard Holmes from Amazon.com
View the Study Pack

This literature criticism consists of approximately 12 pages of analysis & critique of Penelope Fitzgerald.

In the following review, Holmes traces the course of Fitzgerald’s career that eventually led her to write The Blue Flower.

The sensibility of early German Romanticism seems infinitely distant to us now. The very name Novalis, the pseudonym of the poet Friedrich von Hardenberg (1772–1801), sounds like an astronomical explosion on the edge of some remote galaxy. The symbol of the Blue Flower, which he created in his unfinished novel Heinrich von Ofterdingen, was never successfully transplanted into the English-speaking world. As the epitome of German Romantic longing, it was naturalized most convincingly in a delphic entry in one of Coleridge’s Notebooks.

If a man could pass through Paradise in a Dream, & have a Flower presented to him as a pledge that his Soul had really been there, & found that Flower in...

Critical Review by Richard Holmes from Gale. ©2005-2006 Thomson Gale, a part of the Thomson Corporation. All rights reserved.