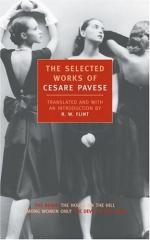 Get Critical Essay by Fabio Girelli-Carasi from Amazon.com
View the Study Pack

This literature criticism consists of approximately 6 pages of analysis & critique of Cesare Pavese.

In the following review, Girelli-Carasi provides a favorable assessment of Stories, examining the themes and plots of the tales in the collection.

The works of Cesare Pavese remain among the most widely known and read by the Italian public even now, nearly forty years after the writer's suicide in 1950. This was an event of such a deep emotional resonance that the development of an impartial and dispassionate debate on the literary value of Pavese's work has been hampered.

After the shock of Pavese's death had been absorbed, his work began being dissected with the voyeuristic goal of "finding" some evidence of psychological disease. Poems and short stories became the favorite targets of this autopsy. Perhaps because of the fragmentary nature of their conception, they were thought to have given voice to personal...

Critical Essay by Fabio Girelli-Carasi from Gale. ©2005-2006 Thomson Gale, a part of the Thomson Corporation. All rights reserved.