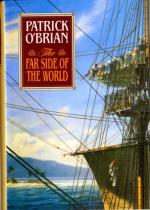 Get Critical Review by Christopher Clausen from Amazon.com
View the Study Pack
View the Lesson Plans

Patrick O'Brian
This literature criticism consists of approximately 7 pages of analysis & critique of The Far Side of the World.

In the following negative review, Clausen complains that The Yellow Admiral is repetitive and that O'Brian should have stopped the Aubrey/Maturin series after the seventh novel.

It's been a long voyage, but Captain John Aubrey, RN, and Dr. Stephen Maturin seem to be heading, if at a leisurely pace, for their final port. Aubrey and Maturin, as millions of readers know, are the co-protagonist of Patrick O'Brian's 18 novels about life on the high seas during the Napoleonic Wars. By the end of The Yellow Admiral, Napoleon has at last been exiled to Elba and peace has returned to Europe—though only for the moment.

It seems an age since Stephen and Jack met at a concert (both characters are accomplished amateur musicians) on the Mediterranean island of Minorca in the spring of...

Critical Review by Christopher Clausen from Gale. ©2005-2006 Thomson Gale, a part of the Thomson Corporation. All rights reserved.