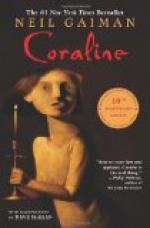 In the following review, De Lint asserts that Coraline is Gaiman's best work of children's fiction yet, and comments that the story is enjoyable for adults as well as children.

Is there anything Gaiman doesn't do well?

Coraline isn't his first foray into children's fiction, but it's certainly his most successful. In fact, it's astonishingly good—an instant classic, if you'll excuse the hyperbole—and one that I can imagine both children and adults reading a hundred years from now with the same enjoyment they do Lewis Carroll's Alice books.

Carroll is actually a good touchstone, since Coraline reminds me of nothing so much as a macabre Alice in Wonderland. The title character doesn't go through a mirror or fall down a rabbit hole, but she does go through a door that...

Critical Review by Charles De Lint from Gale. ©2005-2006 Thomson Gale, a part of the Thomson Corporation. All rights reserved.