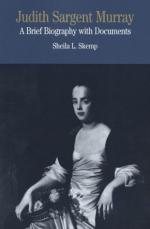 Get Critical Essay by Mary Anne Schofield from Amazon.com
View the Study Pack

In this excerpt, Schofield analyzes Murray's contributions to eighteenth-century drama, as a playwright, critic, and feminist.

Quitting the loom and distaff as Judith Sargent Murray put it (1798, 3:192), the decision to wield the pen rather than the pin, has been the concern of women writers from the sixteenth century. Geographic location did not retard such decisions, and the women in...

Critical Essay by Mary Anne Schofield from Gale. ©2005-2006 Thomson Gale, a part of the Thomson Corporation. All rights reserved.