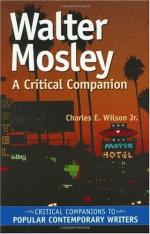 Get Critical Review by John Williams from Amazon.com
View the Study Pack

This literature criticism consists of approximately 1 page of analysis & critique of Walter Mosley.

In the following excerpt, Williams deems White Butterfly an "altogether harsher, more serious piece of work" than its predecessors.

White Butterfly is the third novel by Walter Mosley, the man now doomed to be referred to continually as "Bill Clinton's favourite writer". This is an altogether harsher, more serious piece of work. Mosley's novels are intended to form a cycle, providing a massive portrait of life in black Los Angeles over the postwar period as experienced by the reluctant PI Easy Rawlins.

White Butterfly sees the action move to 1957. A serial killer (yes, yet another one) is preying on black prostitutes in south central LA. No one cares much until a white hooker dies, a rich girl gone bad. Then all hell breaks loose and Easy's called in. Naturally, he solves the case.

Critical Review by John Williams from Gale. ©2005-2006 Thomson Gale, a part of the Thomson Corporation. All rights reserved.