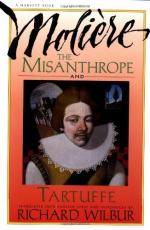 Molière
This literature criticism consists of approximately 19 pages of analysis & critique of The Misanthrope.

In the following essay, Cholakian contends that Molière's Le Misanthrope's underlying presumption is that women camouflage their true selves in order to become what men desire.

Molière's theater is generally seen as profeminist because it champions the cause of ingénues, like Agnès in L'Ecole des femmes, against the tyrannical power of an older male who seeks to prevent them from exercising their “natural” right in the choice of a mate.1

On the other hand Les Précieuses ridicules and Les Femmes savantes have often been considered anti-feminist because they ridicule women who seek to break away from the role assigned to them within marriage and the family and to invade the male world of words and ideas (speaking and knowing).2 According to Bénichou, Moli...

More summaries and resources for teaching or studying The Misanthrope.

Critical Essay by Patricia Francis Cholakian from Gale. ©2005-2006 Thomson Gale, a part of the Thomson Corporation. All rights reserved.