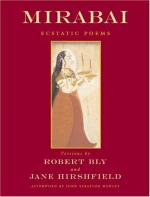 Get Critical Essay by K. S. Ram from Amazon.com
View the Study Pack

This literature criticism consists of approximately 7 pages of analysis & critique of Mirabai.

This essay provides a brief history of Bhakti poetry and its influences and compares Mirabai with two predecessors.

Kabir, Mirabai and Surdas are three of the top four Bhakti poets in Hindi. The fourth is Tulsidas who, in terms of ranking, would probably come first but is excluded from the scope of this note.

‘Bhakti’ is a rather wide label under which each of the three poets discussed in this note has his or her own distinctness. For the sake of convenience and not on any criterion of merit, we could consider Kabir first.

The two significant factors of Kabir's world (XV Century) were: one, the shift of Vedantic religion to dry, abstract intellectualism; and two, the Hindu-Muslim quarrels which had become a sad fact of daily life. It...

More summaries and resources for teaching or studying Mirabai.

Critical Essay by K. S. Ram from Gale. ©2005-2006 Thomson Gale, a part of the Thomson Corporation. All rights reserved.