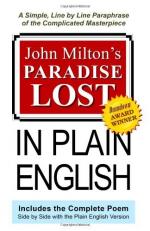 Get Critical Essay by Michael Wilding from Amazon.com
View the Study Pack
Related Topics
On the Morning of Christ's Nativity
On Shakespeare
L'Allegro
Il Penseroso
Sonnet 19

This literature criticism consists of approximately 20 pages of analysis & critique of John Milton.

Wilding argues that Milton's democratic radicalism was present in his early work as well as his later writings.

How radical was the young Milton? Can we find evidence of a political commitment in the poetry associated with his Cambridge years? Is there anything in the early work that looks forward to the revolutionary?

Milton's Poems of 1645 has generally been seen as an unpolitical or apolitical volume, as embodying Milton's youthful poems of the age before the revolution. For those who find the image of Milton the revolutionary politically embarrassing, it is still possible to preserve Milton in the pantheon of great literary, figures, by focusing on this allegedly prepolitical gathering of the "minor poems." The "New Critical" reading of the 1645 volume offered in the commentary by Cleanth Brooks and John E...

Critical Essay by Michael Wilding from Gale. ©2005-2006 Thomson Gale, a part of the Thomson Corporation. All rights reserved.