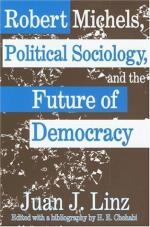 Get Critical Essay by Philip J. Cook from Amazon.com
View the Study Pack

This literature criticism consists of approximately 29 pages of analysis & critique of Robert Michels.

In the following essay, Cook places Michels 's political theories in the context of the historical time in which they were written.

Robert Michels's Political Parties1 and the "iron law of oligarchy" have enjoyed a minor, but strangely respected, and somewhat uncritically accepted position in American social science over the past 20 years. The work still fills an obvious gap in the literature of parties, and has interested a number of people because of its possible negative implications for democratic theory in general. It has become a minor classic.

Many years have passed (especially in the history of the social sciences) since the writing of Political Parties. The simple passage of time creates more problems for the student than may at first be realized.

More summaries and resources for teaching or studying Robert Michels.

Critical Essay by Philip J. Cook from Gale. ©2005-2006 Thomson Gale, a part of the Thomson Corporation. All rights reserved.