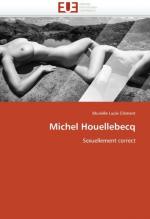 This literature criticism consists of approximately 4 pages of analysis & critique of Michel Houellebecq.

In the following excerpt, Winter examines Houellebecq's notoriety, political perspective, and contemptuous depiction of liberal amorality in Atomised and Plateforme.

The great chronicler of the moral and cultural emptiness of modern France is Michel Houellebecq, perhaps the most talented and contrary writer in Europe today. Many contemporary French writers play with the idea of nihilism; Houellebecq means it, both in his life and work. In person, Houellebecq, who is in his mid-forties, is a dissolute presence, sickened by a life dedicated to cigarettes, alcohol and trips to bizarre, anarchic sex camps in the Paris suburbs, which he satirises ruthlessly in his marvellous novel Les Particules élémentaires (published in Britain two years ago as Atomised).

Gerry Feehily, an Irish literary critic based in Paris, met Houellebecq at a party last year. “He was surrounded by all...

More summaries and resources for teaching or studying Michel Houellebecq.

Critical Essay by Joshua Winter from Gale. ©2005-2006 Thomson Gale, a part of the Thomson Corporation. All rights reserved.