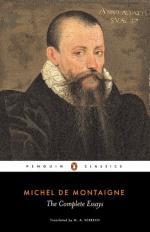 Get Critical Essay by Ian R. Morrison from Amazon.com
View the Study Pack

In the essay below, Morrison explains Montaigne's rejection of torture as part of the execution process and his limited acceptance of torture as a means of interrogation.

Many scholars have described Montaigne's general hostility to torture. Some have also noted a distinction, in criminal matters, between two uses of torture: in executing the convicted, and in interrogating accused persons on trial.1 This note concerns the divergence between Montaigne's views on these two uses.

As of the 1580 Essais, he rejects painful execution as ‘pure cruauté’, and denies its deterrent value: a man not stopped by fear of beheading or hanging, will not be ‘empesché par l'imagination … des tenailles, ou de la roue’ (ii, 27, 700-01).2 Later additions underscore this rejection.

On the other hand, he initially accepts interrogatory torture, albeit warily. The issue is considered...

Critical Essay by Ian R. Morrison from Gale. ©2005-2006 Thomson Gale, a part of the Thomson Corporation. All rights reserved.