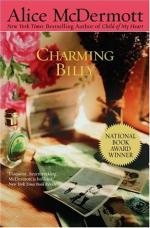 An American critic, Eder received a 1987 Pulitzer Prize for Criticism and a 1987 citation for excellence from the National Book Critics Circle. In the following review of That Night, he lauds McDermott's fresh, detailed evocation of suburbia as well as the characterization of her female protagonist.

The deceptively ordinary elements of That Night are put together with such undercover art and such vigorously individual results that the book seems to be an act of germination more than an act of fiction. Alice McDermott nurtures her suburban pair of adolescent lovers as Mrs. Shelley, no doubt, nurtured a dozen ordinary pounds of Percy Bysshe.

That Night begins with an act of violence that is shocking, pathetic and funny at the same time; and goes on to relate what led up to it and what came afterward...