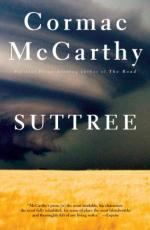 This literature criticism consists of approximately 13 pages of analysis & critique of Cormac McCarthy.

In the following essay, Bell discusses the desires of McCarthy's characters to live in a world uncomplicated by the influences and demands the contemporary world places on them.

Cormac McCarthy's most sympathetic characters wish to live only in the mode of description—the less narrative the better—but the God that rules their world—an editor, clearly—likes stories and, either for his own amusement or to test them, he imposes plots upon them. Take this case of John Grady Cole, in All the Pretty Horses. The plot for him begins before he is born and with someone else's kin:

It runs in the family, said Blevins. My grandaddy was killed in a minebucket in West Virginia it run down in the hole a hunnerd and eighty feet...

More summaries and resources for teaching or studying Cormac McCarthy.

Critical Review by Vereen Bell from Gale. ©2005-2006 Thomson Gale, a part of the Thomson Corporation. All rights reserved.