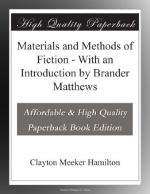 Get Critical Essay by Stuart P. Sherman from Amazon.com
View the Study Pack

This literature criticism consists of approximately 8 pages of analysis & critique of Brander Matthews.

In the following essay, Sherman contrasts what he sees as the mean-spiritedness of the attacks upon Matthews by the new generation of writers and the sweetness of his response.

Criticise the book before you, and don 't write a parallel essay, for which the volume you have in hand serves only as a peg. This is No. VII of Twelve Rules For Good Reviewers, formulated by Brander Matthews in an essay on "The Whole Duty of Critics," 1892.

I should try to follow this rule, if its maker himself had not led me astray by sub-announcing in "The Tocsin of Revolt" a theme which he does not develop. Here is the theme which lurks in the first short essay:

When a man finds himself at last slowly climbing the slopes which lead to the...

Critical Essay by Stuart P. Sherman from Gale. ©2005-2006 Thomson Gale, a part of the Thomson Corporation. All rights reserved.