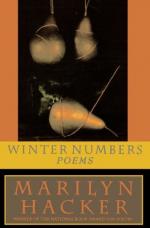 Get Critical Review by Marilyn French from Amazon.com
View the Study Pack

In the following review, French discusses Hacker's use of the sonnet form and sonnet sequences.

The recounting of a love affair through sonnets has a tradition that dates back to Petrarch. Petrarch's Canzoniere centered on his love for a woman he called Laura, who seems more occasion than creature, an idea of woman figuring in poems offering an idea of love as exalted, unable to be consummated or even requited, and ending tragically. What is really celebrated in Petrarch's love poems is the poet's skill, his art and his own emotions—passion sustained interminably and hopelessly.

Petrarch's sonnets inspired a host of imitators in England during the Renaissance. Starting with Sir Thomas Wyatt, many poets attempted the sonnet, and some tried their hands at sonnet sequences. Samuel Daniel and...

Critical Review by Marilyn French from Gale. ©2005-2006 Thomson Gale, a part of the Thomson Corporation. All rights reserved.