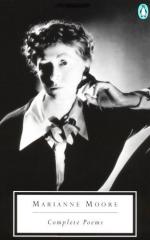 This literature criticism consists of approximately 31 pages of analysis & critique of Marianne Moore.

Some feminine poets of the present day seem to have grown horns and to like to be frightful and dainty by turns; but distorted propriety suggests effeteness.

In making works of art, the only legitimate warfare is the inevitable warfare between imagination and medium. …

Before beginning my discussion of the chronological development of Moore's poetry, I shall substantiate and augment my foregoing claims by comparing specific poems by Moore with poems by Eliot, Pound, and Williams. I maintain that to some extent all...

Critical Essay by Jeanne Heuving from Gale. ©2005-2006 Thomson Gale, a part of the Thomson Corporation. All rights reserved.