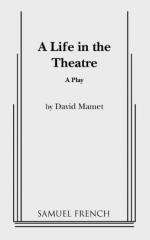 Get Critical Essay by Colin Ludlow from Amazon.com
View the Study Pack

A Life in the Theatre | Criticism

David Mamet
This literature criticism consists of approximately 2 pages of analysis & critique of A Life in the Theatre.

David Mamet's A Life in the Theatre offers a decidedly unglamorous view of the show business world. It emphasises not the ecstatic moments of applause, nor the passionate relationships of those caught up in that world, but the mundane routine of the acting profession. The play's title is surprisingly literal. It is a way of life that the drama seeks to evoke, and it concentrates exclusively upon the theatre, showing almost no concern for anything that takes place beyond the stage door.

The play is written as a series of extremely short, separate scenes linked only by the two characters, both actors, who appear in them all….

There is no storyline to join the different incidents and conversations together, but what the play lacks in plot it partly makes up for in atmosphere….

The image of theatre that the play projects is inevitably limited and distorted by the...

More summaries and resources for teaching or studying A Life in the Theatre.

Critical Essay by Colin Ludlow from Gale. ©2005-2006 Thomson Gale, a part of the Thomson Corporation. All rights reserved.