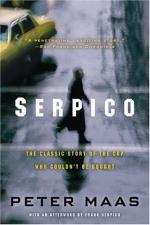 Get Critical Essay by Lucille Deview from Amazon.com
View the Study Pack

This literature criticism consists of approximately 1 page of analysis & critique of Peter Maas.

The trouble with "Marie: A True Story," is that Peter Maas does not tell it as the investigative reporter he is…. Instead, he uses the docudrama technique, replete with re-created dialogue and an appalling lack of objectivity.

His attempts to deal openly with the flaws of his heroine (a legitimate charge for drunken driving, for instance) appear as pathetic rationalizations. The effect is to raise doubts rather than quell them.

His partiality takes on the tone of revenge. The raw language, petty gossip, and snide characterizations of those who oppose Ms. Ragghianti make the reader want to cry "foul." Such savaging does not serve her cause, nor is it necessary. Maas has forgotten an important rule of journalism—just give the facts, and let their weight bring down guilty people or institutions.

Another rule: The writer cannot presume to say what is in the mind of the person...

More summaries and resources for teaching or studying Peter Maas.

Critical Essay by Lucille Deview from Gale. ©2005-2006 Thomson Gale, a part of the Thomson Corporation. All rights reserved.