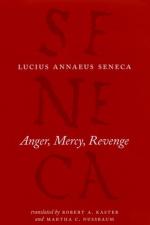 Get Critical Essay by Dana Gioia from Amazon.com
View the Study Pack

This literature criticism consists of approximately 23 pages of analysis & critique of Seneca the Younger.

In the first section of the following two-part essay, Gioia analyzes Seneca's contribution to the formal aspects of Elizabethan drama, including the five-act structure, the introduction of essential secondary characters, and the presentation of the ghost figure. In the second part Gioia characterizes Seneca as "the creator of a new theatrical genre—lyric tragedy. "

In 1543 Giambattista Giraldi Cinthio, the influential Italian playwright, critic, and writer of novelle (from whom Shakespeare borrowed the plots of Othello and Measure for Measure), judiciously summarized the Renaissance view of Seneca's dramas: "In almost all his tragedies he surpassed (in as far as I can judge) all the Greeks who ever wrote—in wisdom, in gravity, in decorum, in majesty, and in memorable aphorism."

More summaries and resources for teaching or studying Seneca the Younger.

Critical Essay by Dana Gioia from Gale. ©2005-2006 Thomson Gale, a part of the Thomson Corporation. All rights reserved.