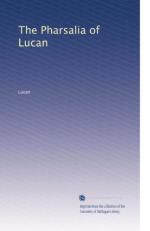 Get Critical Essay by Jane Wilson Joyce from Amazon.com
View the Study Pack

Lucan
This literature criticism consists of approximately 22 pages of analysis & critique of The Pharsalia.

In the following excerpt, Joyce provides an overview of Lucan's Pharsalia, his life, reception as a poet, and his influence.

Lucan (Marcus Annaeus Lucanus) was born 3 November 39 C. E. at Cordoba, son of the Spanish financier Marcus Annaeus Mela and member of a remarkable family.1 His grandfather Lucius Annaeus Seneca ("the Elder"), a successful businessman, wrote a history of Rome, now lost, beginning with the civil war that forms the subject of Lucan's Pharsalia; blessed with longevity (he lived to be nearly a hundred) and a phenomenal memory, a keen critic of Roman rhetoric, he could quote at length even from speeches heard in boyhood; some of his work on oratory is extant. One of Lucan's two uncles, Lucius Annaeus Gallio (later adopted and renamed Lucius Iunius Novatus Gallio...

Critical Essay by Jane Wilson Joyce from Gale. ©2005-2006 Thomson Gale, a part of the Thomson Corporation. All rights reserved.