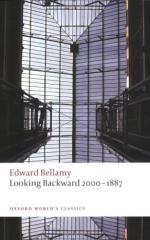 In the following essay, Matarese proposes that Looking Backward was popular in part because it was consistent with the ideals inherent in America's unique national identity.

I have always believed that this anointed land was set apart in an uncommon way, that a divine plan placed this great continent here between the oceans to be found by people from every corner of the earth who had a special love of faith and freedom.

One of the most striking features of Edward Bellamy's utopian novel, Looking Backward, is the absence of details about the international order. Although Bellamy stated that his initial drafts of Looking Backward depicted a Great World Nation in which the United States was merely an administrative unit, he...

Critical Essay by Susan M. Matarese from Gale. ©2005-2006 Thomson Gale, a part of the Thomson Corporation. All rights reserved.