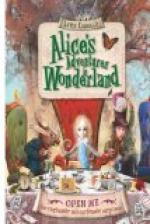 Get Critical Essay by Daniel Bivona from Amazon.com
View the Study Pack
View the Lesson Plans

In the following essay, Bivona considers Alice's Adventures in Wonderland as an allegory of nineteenth-century British imperialism.

Few would dispute the claim that Lewis Carroll was fascinated by games and puzzles. His interest in logical and mathematical games has been well documented. Moreover, although he seems rarely to have turned his attention to politics, on at least one occasion when he did—at the time of the Parliamentary debate over the Second Irish Home Rule Bill—he took a characteristic delight in reducing this heated political debate to a puzzle. In fact, his “Home-Rule Mystery” was just one of many Home-Rule puzzles and games introduced to the English market in the months following Gladstone's introduction of the Bill in February of 1893.1

A man who could construct a parlor game out of an...

Critical Essay by Daniel Bivona from Gale. ©2005-2006 Thomson Gale, a part of the Thomson Corporation. All rights reserved.