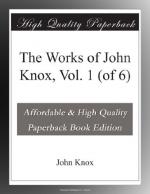 Get Lecture by James S. McEwen from Amazon.com
View the Study Pack

This literature criticism consists of approximately 22 pages of analysis & critique of John Knox.

In the following excerpt, originally delivered as a lecture at New College, Edinburgh, McEwen compares and contrasts Knox's sometimes inconsistent views on predestination with the views of Calvin and of Luther, and examines Knox's interpretations of election, assurance, free-will, and reprobation.

The main use of adjectives of this type is to induce the reader or hearer to pass judgment on purely emotional grounds, without asking to see the facts; thereby saving trouble all round, and producing the desired result...

More summaries and resources for teaching or studying John Knox.

Lecture by James S. McEwen from Gale. ©2005-2006 Thomson Gale, a part of the Thomson Corporation. All rights reserved.