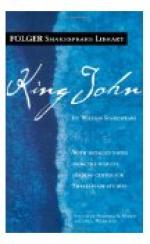 In the following excerpted review, Tucker assesses Gregory Doran's Royal Shakespeare Company production of King John, praising Doran's emphasis on the plight of the innocent and finding that the production as a whole was appropriately dark in tone.

Although often produced during the nineteenth century, King John was unjustly neglected in the twentieth. Certainly not among Shakespeare's best plays, King John forces its audience, nevertheless, to look at unpleasant truths about the political world that many persons would like to ignore.

For all the shakers and movers of the play—John himself; his mother Eleanor; the French king Philip; Louis, the Dauphin; and Cardinal Pandulph—are utter Machiavellians. The love of power and the love of gain (Commodity, as Philip the Bastard, terms it) dominate the world. Throughout the play these and other characters plot...

Critical Review by Kenneth Tucker from Gale. ©2005-2006 Thomson Gale, a part of the Thomson Corporation. All rights reserved.