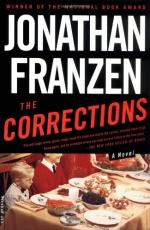 Jonathan Franzen
This literature criticism consists of approximately 16 pages of analysis & critique of The Corrections.

In the following review, Edwards examines the tumult following The Corrections after being chosen as an Oprah Winfrey book club selection, as well as Franzen's concerns about “high art” and the ability of quality fiction to appeal to a broad audience.

In 1968, reviewing a book called Gore Vidal, Gore Vidal (yes, it was he) wrote that “it is well known that in any year there is only One Important Novelist worth reading.” In 1932, putting down some pretenders to literary importance, F. R. Leavis wrote that “the Sitwells belong to the history of publicity rather than of poetry.” In 1849, doing heaven knows what, Alphonse Karr wrote that “plus ça change, plus c'est la même chose,” and he was certainly right.

The One Important Novelist worth reading in 2001 has to be Jonathan Franzen. The Corrections was almost universally applauded...

Critical Review by Thomas R. Edwards from Gale. ©2005-2006 Thomson Gale, a part of the Thomson Corporation. All rights reserved.