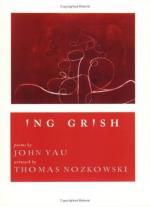 Get Critical Review by Clayton Eshleman from Amazon.com
View the Study Pack

This literature criticism consists of approximately 4 pages of analysis & critique of John Yau.

In the following favorable review of Corpse and Mirror, Eshleman contends that Yau's poetic abilities establish him “as one of the most genuinely gifted poets of his reticently emerging generation.”

Corpse and Mirror, selected by John Ashbery as one of the five “National Poetry Series” books this year, is John Yau's seventh collection. It is clearly the most experimental, and probably the strongest, book to appear in the series publishing five books each year, now in its fifth year.

One might begin to think about Yau's writing by summoning aspects of Confucianism, Edward Hopper and Franz Kafka. As a Chinese American, Yau draws on images from ancient China, evoking a world of omens and memories that is not “now” but not entirely “then” either. He has a way of presenting his materials, via...

More summaries and resources for teaching or studying John Yau.

Critical Review by Clayton Eshleman from Gale. ©2005-2006 Thomson Gale, a part of the Thomson Corporation. All rights reserved.