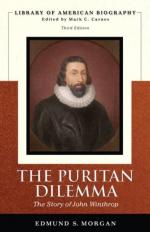 Get Critical Essay by Lee Schweninger from Amazon.com
View the Study Pack

This literature criticism consists of approximately 75 pages of analysis & critique of John Winthrop.

SOURCE: Schweninger, Lee. “In Response to the Antinomian Controversy,” “The Journal: A New Literature for a New World,” and “Cheerful Submission to Authority: Miscellaneous and Later Writings.” In John Winthrop, edited by Barbara Sutton, pp. 47-66; 87-98; 99-115. Boston: Twayne Publishers, 1990.

In Response to the Antinomian Controversy

One Mistris Hutchinson … a woman of a haughty and fierce carriage, of a nimble witt and active spirit, and a very voluble tongue, more bold then a man, though in understanding and judgement, inferiour to many women.

Critical Essay by Lee Schweninger from Gale. ©2005-2006 Thomson Gale, a part of the Thomson Corporation. All rights reserved.